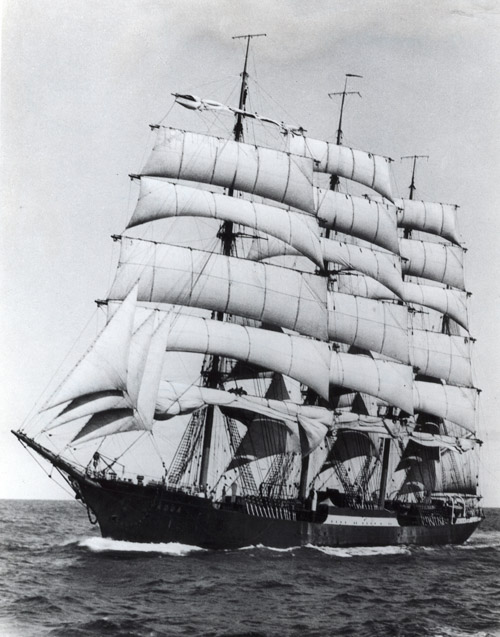 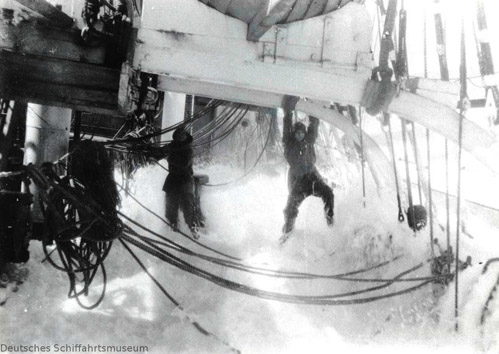 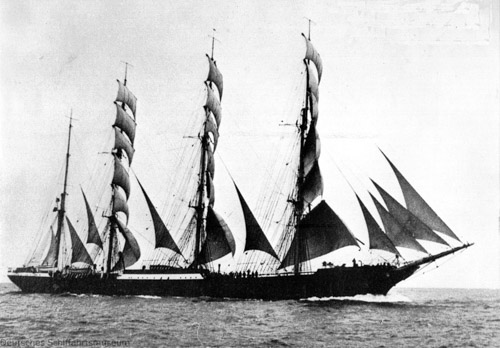 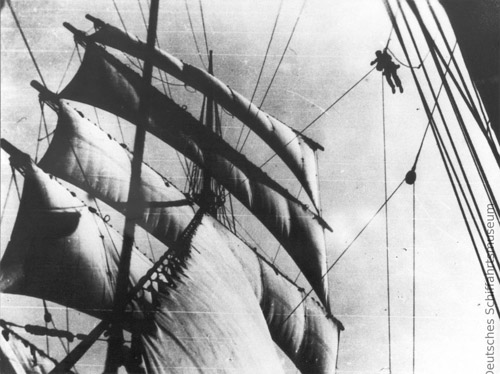 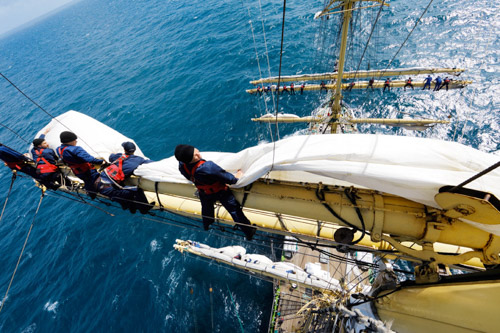 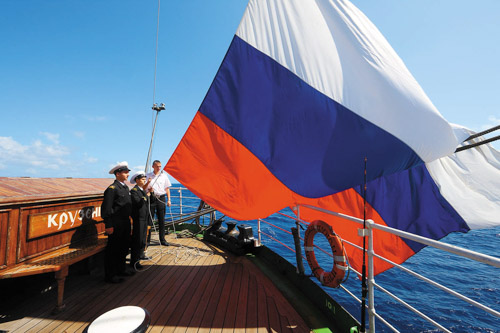 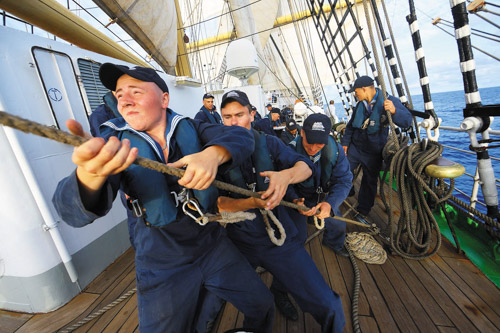 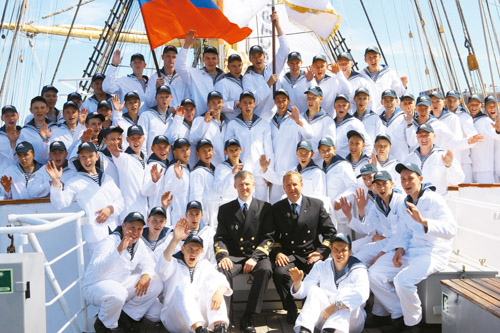 Barque "Kruzenshtern" is a symbol of Kaliningrad, preservation of marine traditions and continuity of generations

In 1925 the famous Hamburg-based German sailing ship owner F. Laeisz ordered a big steel sailing vessel from the shipyard Johan C. Tecklenborg in Geestemuende near Bremerhaven – a four-masted barque for the Cape Horn-trade. Less than a year later the ship was ready.

According to the tradition, the names of all Laeisz's ships start with the letter 'P'. Therefore Erich F. Laeisz's eleven year old daughter Christine gave the new bark the name 'Padua'.

From 1926 to 1941 the 'Padua' made 17 voyages, 15 of which were deep-water passages to Chile at the west coast of South America or to Australia. The ship rounded Cape Horn 28 times and carried tens of thousands tons of cargo in her holds.

After the end of World War II the victorious Allied Powers USSR, USA and Great Britain decided to disband the German fleet and to distribute the ships among themselves as war reparations. Therefore in January 1946 the Soviet flag was hoisted on bord of the 'Padua'. In February 1946 the ship was re-namend 'Kruzenshtern' to honour the admiral Ivan Fyodorovich Kruzenshtern, the leader of the first Russian round the world-voyage from 1803 to 1806, scientist-hydrographer and teacher of a whole generation of outstanding Russian seamen.

After extended repairs, lasting until 1961, the then scientific research vessel 'Kruzenshtern' worked for 5 years on a programme of the Soviet Academy of Sciences as part of a big group of research vessels to explore the Atlantic ocean and at the same time as a sail training vessel for cadets of the Soviet Navy under the command of Captain Pavel Vasilievich Vlasov.

In June 1967 the sail training ship (STS) 'Kruzenshtern' left her new home port Riga on its first voyage under the flag of the Ministry of Fisheries of the USSR.

In 1972 the ship received a new captain, Ivan Georgevich Schneider, under whose leadership a new aera began in the legendary sailing ship's life. From 1974 to 1977 the vessel won a whole collection of prestigious cups and prizes, among them a silver model of the clipper ship 'Cutty Sark', which the 'Kruzenshtern' received in 1974.

In 1984 the 'Kruzenshtern' again changed ownership – from the Baltic fleet of training vessels based in Riga to the government-owned fisheries company 'Estrybprom' in Tallinn. And the ship got a new captain – Gennadyi Vasilievich Kolomensky.

By order of the Ministry of Fisheries the ship was moved in 1991 from 'Estrybprom' to the Higher Institute of Naval Engineers (KVIMU) in Kaliningrad, now called the Baltic Fishing Fleet State Academy and still the owner of 'Kruzenshtern'.

First round the world-voyage: 1995-1996This voyage was scheduled to commemorate the 300th anniversary of the Russian Navy, the 225th birthday of I.F. Kruzenshtern and the 190th anniversary of the successful completion of the first Russian round the world-voyage. The ship sailed partly on the same path as taken by I.F. Kruzenshtern and Y.F. Lisyansky on their voyage and partly followed the 'Padua's' first voyage in 1926-1927.

'Kruzenshtern' crossed the Atlantic ocean, rounded Cape Horn, calling, among others, at Rio de Janeiro, Montevideo, Chile, Tahiti, Tokio, Vladivostok, Singapore, Australia, and Cape Town. During the 5389 hours (224.5 days) of the round the world-voyage the ship covered 42433 nautical miles. The flag of Russia was shown on three oceans, crossing the Equator four times, and in 15 foreign ports in 13 countries of Europe, South America, Asia, Austrialia, Oceania and Africa.

During this expedition the ship took part in the Transatlantic race 'Atlantic Challenge 2009', visiting ports in Spain, the Bermudas, the USA, Panama, Mexico, Canada, Venezuela, Cuba, the Netherlands, Germany, and Belgium. On the 9th of May, the day of the 65th anniversary of the victory, the ship returned to its homeport Kaliningrad. Behind lay approx. 39000 nautical miles, covered during the 299 days of the voyage's two parts. A third of the total mileage was covered under sail only.

Every year the four-masted bark 'Kruzenshtern' sails on three training voyages – in spring, summer and autumn. On board of the sail training vessel cadets of various Russian nautical colleges and institutes receive their first shipboard practice.

During this years' voyages 'Kruzenshtern' will visit twelve ports in nine countries.

After a 20 years' break the ship is again scheduled to visit the port of Casablanca, Morocco. There it is planned to sign an agreement between the Fishery Agencies of the Russian Federation and the Kingdom of Morocco.

For the first time in history, the legendary member of the Russian fleet will visit the French ports Sete and Brest, where 'Kruzenshtern' will take part in the International Maritime Festival, where every five years ships from all over the world meet.

The Russian four-masted bark's visit to London from the 27th of July onwards is dedicated to the world's most important sports event – the 30th Summer Olympics. 'Kruzenshtern' and its crew already gained some experience in supporting the Russian team when visiting Vancouver during the Winter Olympics there. This time the legendary sailing ship's mission is connected with the 22nd Winter Olympics in Sochi.

'Kruzenshtern' will be in St. Petersburg to meet the participants of the World Economic Forum there.

In 2012 the ship also will visit the Canadian ports of Quebec and St. John's. In Quebec the visit serves the ongoing preparations for a huge Maritime Festival which is planned in Canada in 2017. In St. John's 'Kruzenshtern' will represent Russia during the 13th Annual General Assembly of the IAMU (International Association of Maritime Universities).

Among the traditional visits to Germany is the annual Port's Birthday festival in Hamburg. Further in Travemuende the 'Kruzenshtern's' cadets will have possibility to visit their ship's near-sister vessel, the 'Passat'.

In Poland the cadets will take part in the festival 'Day of Ocean Sail', which will be held in Sczeczin. In Gdansk the winners of the annual international regatta 'Kruzenshtern Cup' will be awarded their prizes.

ПОСЛЕДНИЕ НОВОСТИ
Contact us
You can ask any questions, we’ll be glad to help you